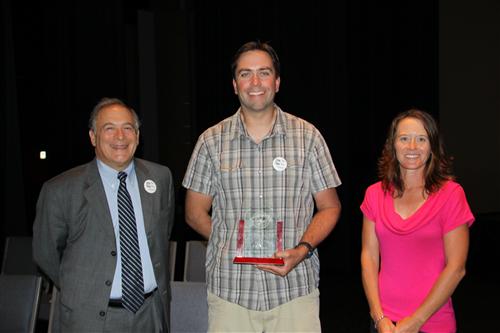 Entering his 16th year in education and fifth at Clover High School, LaFave had a summer unlike many of his peers. Through a fellowship at Duke University he spent two months in the Arctic with a team of educators from across the world researching wolf spiders’ and their impact on the environment. This experience gave LaFave a deeper understanding and greater appreciation for all that is happening not only at Clover High School but the district as a whole.

“Working with teachers from around the country, I was very proud to tell them about the things we have going on in Clover within our district and within schools,” he said. “If you take a minute and you look at what we’re doing and compare it to what’s going on elsewhere, we are really doing some amazing things and I think it’s time we highlight those things, showcase them and be proud of them. We work in a great community with great students.”

He describes his teaching as a process of being reflective and adaptive and adds that his instruction is guided by a two simple questions he asks himself daily: “Am I teaching the way I would want to be taught?” Am I teaching the way I would want my daughter to be taught?” He adds, “If I cannot answer those two questions with an honest ‘yes,’ then I need to change my approach. I have never taught a course the same way twice because I’m always looking for ways to engage and inspire students.” A leader in integrating technology into education, LaFave says he “pushes the envelope by taking a chance on everything from the use of social media to the use of cell phones in the classroom and most recently by using a ‘flipped’ classroom approach to free up more direct instructional time.”

Superintendent Dr. Marc Sosne and Kelly Hart, 2011-2012 District Teacher of the Year, presented LaFave with a trophy and a $2,000 check during the ceremony. Tina Faris, an assistant branch manager with Family Trust Federal Credit Union, presented LaFave with a $500 award as well. The credit union is a strong supporter of the district’s teacher recognition programs, including teacher of the year and employee of the month sponsorships that total more than $2,500 per year.

LaFave holds a B.A. in Biology from the State University of New York at Potsdam and is currently earning his M.S. in Curriculum and Instruction with a concentration in Educational Technology at Winthrop University.